(Editor’s note: clicking on links might lead to insanely amusing schlitz. Or just informative schlitz. Depends on the link)

You ever sit around and just think about how the Emperor might well have no clothes? I did yesterday after I actually saw much-hyped alien horror flic Prometheus. Let me tell you something straight-up: the Emperor has NO @#$% CLOTHES!

Here’s what online aggregate-smart-machine Rottentomatoes had to say about Prometheus by way of critical consensus:

“Ridley Scott’s ambitious quasi-prequel to Alien may not answer all of its big questions, but it’s redeemed by its haunting visual grandeur and compelling performances — particularly Michael Fassbender as a fastidious android.”

May not answer ALL of it big questions? Alien, whaaaaaaaaaat? Alien, pleeeease! Not only weren’t there any answers, there weren’t any big questions either! The Emperor has no clothes! What the hell is wrong with you people?

How to put this… wait, I’ve got it: Prometheus is one of the stupidest, most overhyped, most boring pieces of crap ever to disgrace the silver screen. People who should be turned to alien slime puddles, though not necessarily in this order, include:

Don’t see Prometheus.  Just don’t.  Not even on DVD.  It’ll be two hours you can never get back from the vacuum of space, much as you’d like to. If you want good alien horror, you’d be better off painting yourself green, drinking a pint of turpentine, and swallowing a lit match before running around the neighborhood (naturally, I’m describing my Saturday nights). Shame on you, Ridley Scott, and shame on the film critics of the world for not seeing through this thin, under-realized pile of alien feces. Shame on you for taking the fees.

The Emperor has no clothes! Hell… you know what? It’s worse than that. The clothes have no Emperor. Hot damn!

Did you see Prometheus? Share your thoughts in the comments section. Also, be sure to take the Charlize Theron Butt Poll 2. 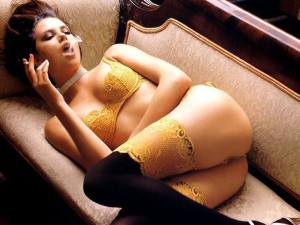 (Editor’s warning: links might lead you to some insanely funny shit… or not.  It depends on the link.)

You ever just sit around and think about The Great Gatsby? I did recently and I realized, yet again, that it’s a great fuckin’ book. Hot damn, F.Scott Fitzgerald, as a writer, I gotta hate you! But man, as a reader, I gotta love you. How did he write that shit, you know? Deal with the devil? Was it all the booze? And if so, what was he drinking and where can I get me some? Hot damn!

In case you’ve been so  foolish as to never read what may well be the best novel in the English language, here’s what it’s about: Nick Carraway, a penniless day-trader, finds himself fascinated by the lavish lifestyle and sexy parties of his much richer neighbor, the mysterious Jay Gatsby. Gatsby, as it turns out, has been in love with Nick’s cousin, Daisy Buchanan, for forever and a day. Daisy is married to a blithering asshole named Tom who likes to punch his mistresses. Jay and Daisy start bangin’ on the side and shit goes down. You do the math. It’s a great fuckin’ book!

Recently, between bouts of the DTs, I read somewhere that they’re making a new movie version of The Great Gatsby, and I reckon that’s a good thing seeing as how the other movie versions of that fine, fine American novel pretty much made me want to jump through the damn screen and strangle everyone involved for taking a giant dump all over our cultural and literary heritage.

Probably the best version so far was the one with Robert Redford as Gatbsy, even though old Robbie looked a little long in the tooth to play boy-millionaire Jay Gatsby.

Gatsby: “Oh, Daisy, I’ve loved you since I was an 18 year-old military conscript.”

Gatsby: “Oh, about thirty-odd years ago. Want to see my wrinkly first lieutenant?”

Apart from Rob being too old, the thing that really bugged the living shit out of me about the movie was child-hoarder Mia Farrow. Mia Farrow? This is the chick that Gatsby is supposed to be so obsessed with that he built himself a new life just to try and get with her? This is the chick who men are willing to fight and die over? Hey, no offense to Mia Farrow, but she is and always has been a lifeless, irritating, hideous slag. I mean, I’m sure Mia Farrow’s a nice enough woman in real life, but I’m not that into necrophilia. I mean, truth be told, I’ve actually seen corpses with more sex appeal than Mia Farrow. I mean…okay, enough! Hot damn! I’m sorry. No, I’m not. Hot damn!

Anyway, the new movie version is gonna star Leo Dicaprio (aka ‘The Prettiest Girl in Hollywood’) as Jay Gatsby and Tobey Maguire (aka ‘The Prettiest Ugly Girl in Hollywood’) as Nick Carraway. Leo seems a decent fit for Gatsby, though Brad Pitt would have fit the bill of aging golden-boy a little better, and Tobey is just about right as nearly invisible, retiring narrator Nick Carraway. Then you’ve got Carrie Mulligan as Daisy, and she’s like a million times hotter than Mia Farrow (who reminds me of a zombie, only I’d rather get blown by a zombie). And the director, Baz Luhrmann, has got a real flare for dance scenes and bright over the top shit. All in all: Clayton digs it!

Daisy: “Nick, what are you doing under the table?”

Fitzgerald spent almost three solid years of his tragic, alcohol-drenched life writing The Great Gatsby, all the while dealing with his schizophrenic, batshit wife, Zelda. In the end, despite the novel being almost flawless, it was commercially a flop.  Fitzgerald died of an alcoholism-related heart attack just four days shy of Christmas, in 1940, believing himself to be a damn failure. A few years later, his wife, Zelda, died in an asylum when the place went up in flames. Good times!

So what’s the moral of the story, boys and girls? Don’t drink so much your heart quits? Don’t fuck schizophrenics and if you do, sure as shit be out the door next morning bright and early with your fedora in your hand? I don’t think so. I think the moral is that if you take all your energy and genius and harness that shit to real, brutal, five-in-the-damn-morning-every-motherhumping-day discipline, you can make something so damn beautiful that people will never forget you. One day, if you’re real lucky, long after you’re worm shit, they might even make a movie out of your stuff starring Leo and Tobey. So please, guys, in honor of F. Scott and our cultural heritage: keep your hands off each other’s junk and the focus on the girl. Hot damn! I’m sorry. No, I’m not. 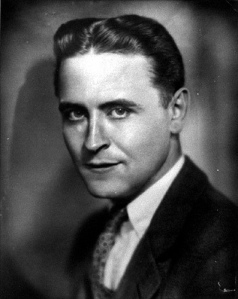 “I am very,very drunk but my book is very, very good.”