(Editor’s note: clicking on links might lead to insanely amusing schlitz. Or some horrific/informative schlitz. Depends on the link)

You ever just sit around and think about German sneaker-maker Adidas? I did, recently, when I came across a cute little idea those wacky Europeans had: a sneaker with prison-orange shackles that wrap around the wearer’s ankles. 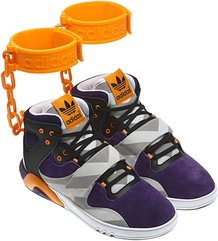 Now I know what you’re thinking: Who the heck could this possibly offend? Just because the shoes are obviously marketed to young black dudes, and just because black folks have endured rape, torture, and enslavement at the hands of white folks, and just because Germans haven’t always been awesome in terms of their human rights record, and just because the first thing you think of when you see the #@$!ing shoes is @#!$ing Kunta Kinte and whip-scarred backs and dead black folks on slave ships — well that’s no reason why anyone should be offended…right? Hot damn!

Among those not super-amused by Adidas was Jesse Jackson. In a statement, he said:

“The attempt to commercialize and make popular more than 200 years of human degradation, where blacks were considered three-fifths human by our Constitution is offensive, appalling and insensitive. Removing the chains from our ankles and placing them on our shoes is no progress. … These slave shoes are odious and we as a people should be called to resent and resist them.”

Come on, Jesse! Where’s your sense of humor? Wait — what’s that you say? You had it whipped out of you by a cheery white man that doesn’t care whether your young men rot in prison or die in storm drains? My bad!

Anyway, here’s a memo to the German sneaker dudes: What the @#$! is wrong with you cabbage breathing donkey holes?

In the wake of the Shackle Shoe fiasco, Adidas has also had to withdraw several other great pieces of concept footware:

What do you guys reckon? Adidas Shackle Shoe: good clean fun? Or a police truncheon up the ass? Let me know in the comments section. You! Yeah…you! Leave a damn comment! Hot damn.